Don’t know what Loot Crate is?

Loot Crate is one of the original geek subscription boxes Its been around for a while and there are very good reasons why it has remained so popular boxes for so long. Every month you get 4-6 items valued at over $50 all for as low as £21 including delivery. In your Crate you can get  collectibles, t-shirts, home goods and much more! In recent month Loot Crate have become almost 100% exclusive and so tend to send items you can only get from buying your own Loot Crate. Feel free to check Loot Crate out here. Here is a very quick breakdown of what was in the Loot Crate October 2017: 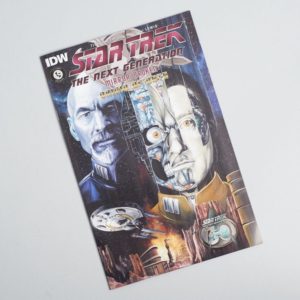 If you’re a comic book collector you won’t want to pass on this. This comic is 100% exclusive to Loot Crate which makes it an exciting item on its own but then paired with Star Trek really makes it something not to miss! Definitely may favourite item in this month’s crate. All subscribers get to build their own R2-D2 from wood (by Incredibuild). Thankfully this is no where near as difficult as it looks (or sounds with 81 pieces) and only took around half an hour to complete. A fantastic collectible for any Star Wars fan.

Unlike previous months, this figure is not a Q-Fig and instead comes straight from Loot Crate themselves however it is still an awesome looking item all the same. With that being said though, it is slightly on the small side at only 3 inches tall. At least it’ll easily fit in next to my other figures! Not the most exciting design as far as Loot Crate T-shirts go but still pretty cool if you are a fan of blade runner. Probably my least favourite item this month due to the plain design. This month’s box turns into a cool ‘Robotic’ themed breakfast cereal. Really like the design of this box and definitely quite a funky item. There is no doubt that this was one of the easiest boxes to build yet. I can say for certain I have loved every pin Loot Crate have sent since they changed how they were produced a year or two ago. This is no exception as I really like the cute design of this little robot.

Not the best box but not the worst box. I loved the comic book and can’t stop staring at my wooden R2-D2 in all it’s glory. The Alien statue while really cool, was a little on the small side and the Blade Runner T-shirt was slacking on the design front in my opinion. I would definitely suggest this box for the money though as I more than feel that it was good value for money.

Want to try Loot Crate out for yourself? Then simply subscribe here.